Yantou Xuanjian, Qinshan Wensui, and Xuefeng Yicun studied with Deshan Xuanjian. One evening the three were walking together in the courtyard and came upon a pail of water. Qinshan commented, “When the water is still, the moon comes out."

Xuefeng countered, “When the water is still, the moon doesn’t come out.”

Yantou pushed the pail over with his foot and continued walking. 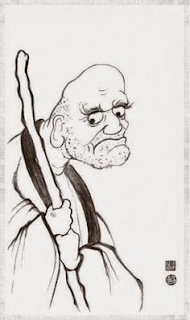 Deshan Xuanjian  would become one of the great masters of the classic period of Chinese Zen, but as
a young student he was given to intellectualism. His teacher was Lungtan Chongzin. Lungtan recognized the younger man’s potential and was patient with him.


One evening, Deshan visited his teacher and posed various questions about Buddhism. Finally, Lungtan said, “It is getting late. You should retire for the night.”

Understanding that he had been dismissed, Deshan bowed and opened the screen to leave the master’s quarters. Looking outside, he remarked, “It is very dark.”

Deshan put out his hand to take the candle, but, just as his fingers touched it, Lungtan blew it out. At that moment, Deshan’s mind was opened.

The next morning, Deshan built a fire in the courtyard before the meditation hall and burned all his books. “However profound the commentaries are,” he said, “in comparison with enlightenment they are like a single drop of water to the great ocean.” 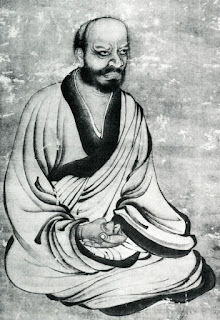 Linji Yixuan [Rinzai Gigen] is the Tang Dynasty master from whom the Rinzai school of Zen descended. In the Chinese society of his time, the idea of a man without rank was difficult to comprehend; each person was expected to know his place within the Confucian hierarchy of responsibilities and obligations. One day, however, Linji told his disciples: “Over a mass of reddish flesh there sits a true man of no rank. This true man of no rank comes in and goes out of your face all of the time. If you haven’t identified him yet, do so now. Look!”
Dingzhou stood and asked, “Who is this man of no rank?”
Linji stood up, took hold of the monk’s robes, and shook him. “Speak! Speak!” he demanded.
Dingzhou, not knowing how to reply, remained silent.
“What a piece of dried shit this true man of no rank is!” Linji said, releasing the monk.

Chanqing Daan said to his students:

“What are you looking for by coming to me? Are you seeking to become a Buddha? Then you should know that you already are Buddha. Why run from place to place, like a deer chasing the mirage of water? Your mind, just as it is, with its thoughts and imaginings, just this is Buddha-mind. Where else will you find it?

“I lived with Guishan Lingyou for more than thirty years. I ate Guishan’s food. I shat Guishan’s shit. But I didn’t study Guishan’s Zen. All I did was to look after an ox. If the ox strayed from the path, I brought him back. If he trampled the grain in another’s field, I disciplined him. For a long time it was a pitiable beast. Now he has become a magnificent white animal always in front of my face. All day long, he reveals himself clearly. Even though I let him roam as he will, he doesn’t stray.

“Each of you has a treasure beyond price. It’s the light of your eye which illuminates the mountains and rivers. It’s the power of your ears which allows you to hear pleasant and foul sounds. So it is with all your six senses, although you’re unable to comprehend it.” 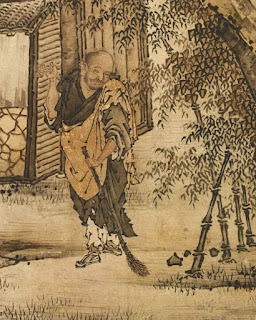 Xiangyan Zhixian and Guishan Lingyou were both students of Baizhang Huaihai. Before coming to Baizhang, Xiangyan had devoted himself to the study of the Chinese classics as well as the traditional Buddhist scriptures, and he acquired a reputation for scholarship.  He kept copious notes on his studies and was known to have a ready answer to every question he was asked.
After Baizhang died, Xiangyan presented himself to Guishan, who had been declared the master’s dharma successor, and, even though they were about the same age, Xiangyan asked to be accepted as a disciple.  Guishan, however, was reluctant to grant the request.
“When we were both disciples of our late master,” Guishan said, “you were said to be able to give ten answers to a single question.  This, however, isn’t the way of Zen.  Such intellectual attainments only result in an abstract or analytical comprehension, which really isn’t of much use.  Still, perhaps you do have some insight into the truth of Zen.  So tell me: what is your true self, your self before your mother gave birth to you, before you came to know east from west?”
Xiangyan was unsure how to reply to this question but ventured a number of attempts, each of which Guishan dismissed.  Finally he said, “Please, then, teach me.  Show me this original self.”
“I’ve nothing to give you,” Guishan told him.  “Even if I tried to instruct you, that would only provide you an opportunity to ridicule me later on.  After all, whatever I have is my own and can never be yours.  How can that be of any help to you?”
Xiangyan retired to his quarters, where he searched through the books and notes he had collected over the years, but nothing he found in them helped him understand what Guishan was asking for when he demanded that Xiangyan “show” his original self.
“A picture of rice cakes will never satisfy hunger,” he admitted to himself.  Then he gathered all his papers together, took them outside, and set fire to them.  “What’s the use of studying Buddhism, so difficult to comprehend and too subtle to receive instruction from another?” he said to himself.  “I’ll become a simple monk, abiding by the precepts, with no desire to try to master things too deep for thought.”
He left Baizhang’s temple that day and traveled for many weeks, eventually coming to a ruined mountain temple where the remains of the National Teacher were buried.  Xiangyan found the tomb in a state of deterioration.  So he built a grass hut nearby and took upon himself the responsibilities of care-taker.
He carried out his tasks as mindfully as he could, and one day, as he was sweeping the grounds with a broom, a stone he cleared away struck a bamboo stalk.  The sound, sharp and hollow, was clear in his attention, and the moment he heard it he came to a deep awakening.  He was speechless for a moment, then broke out laughing.
He went into the ruined temple, lit incense in gratitude, and bowed in the direction of Guishan’s temple.  Then he traveled to see the man who had refused to teach him.  “Your kindness to me was greater than even that of my parents,” Xiangyan told Guishan.  “Had you tried to explain this truth to me in words, I would never be where I am now.”

Posted by Richard Bryan McDaniel at 04:36 No comments:

Yangshan Huiji studied with Guishan Lingyou. After many years of working together, Guishan came upon Yangshan seated in meditation beneath a tree.  The master prodded the student’s back with his staff.  Yangshan turned to him, and Guishan asked, “Do you have anything to say?”


“Not a word,” Yangshan said.  “Nor would I borrow one from anyone else.” 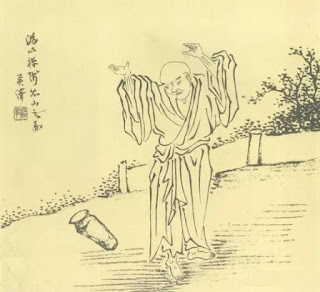 Guishan Lingyou was the founder of the Guiyang school of Zen. He began his career, however, as the cook at the monastery of Baizhang Huaihai.

It is said that Baizhang had decided to open another monastery and sought to choose a monk worthy to head it. He called his disciples together and told them that whosoever could best answer a question he put would be selected the abbot of the new monastery. Then he placed a flower vase on the floor in front of him and asked: “Who can tell me what this is without saying its name?”
There was a period of silence before the chief monk suggested: “No one would call it a wooden shoe.”
Then Guishan came forward and nudged the vase with his foot, after which he left the chamber. Baizhang smiled and announced, “The cook has answered best.” And so Guishan was chosen to lead the new monastery. 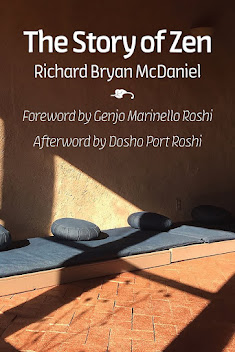 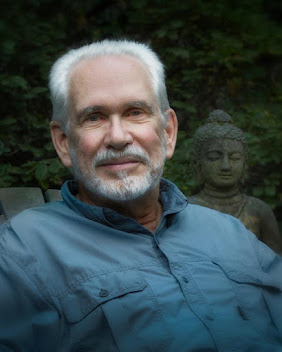